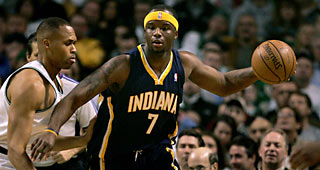 McGrady and O'Neal, who are both 41 and live in Texas, believe they can offer young players wisdom from their experience in the NBA.

“We think it’s needed, and we have a passion for it,” McGrady said. “We’re around kids every single day because we have youth programs. It just makes sense. We see the lack of information that these kids are getting, so we would be doing a disservice to our people if we don’t lend our expertise of what we know and help guide them. This is a calling that we have.”

O’Neal intends to take the National Basketball Players Association test in January to become a registered NBA agent and hold partner status alongside McGrady. McGrady will likely step away from his broadcasting role with ESPN.

“Make no mistake,” O’Neal said, “this is very personal.”

“There’s no magic wand for this,” O’Neal said. “We’re not trying to say we’re the magic wand. But we’re going to be different. You can’t name another pair of people who have had the level of success and the ups and downs that we’ve had in our careers.”

McGrady and O'Neal were both represented by Arn Tellem during their playing careers.

“At the end of the day, they can’t get all the players," McGrady said of his new rivals. "Obviously it’s going to take us some time to get our feet wet and really understand how this thing works. But we’re not intimidated by anybody. We know there’s going to be a lot of people trying to poke holes into this.”