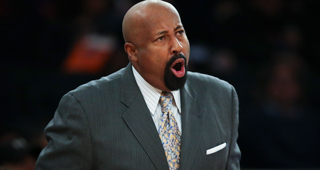 The New York Knicks will hire Mike Woodson, Andy Greer and Dice Yoshimoto as assistant coaches on the staff of Tom Thibodeau.

Woodson was previously head coach of the Knicks.

Greer joined Thibodeau's staff with the Minnesota Timberwolves in 2016 and left the franchise with him in January of 2019.

Yoshimoto worked with Thibodeau with both the Chicago Bulls and Wolves.