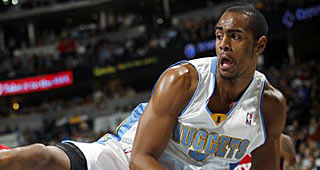 Arron Afflalo is leading an investment group in talks to purchase the Minnesota Timberwolves and Minnesota Lynx.

Afflalo is partnering with entrepreneur Jay Bloom and several other investors to purchase a purchase the teams from Glen Taylor. Affllalo's playing experience and relationships across the league would aid the transition into the NBA for a group of prospective owners that do not have sports ties, and Bloom helped recruit the financial backing to make a serious bid.

Afflalo's group first expressed interest in July, but Taylor entered a 30-day exclusive negotiating agreement with Daniel Straus. The exclusivity has since expired without an agreement with Straus, opening the door for Afflalo’s group to make a push.

The Straus Group remains interested in completing a deal, but talks have stalled.

Taylor has sought assurances from prospective owners that they won't relocate the franchise from Minnesota.