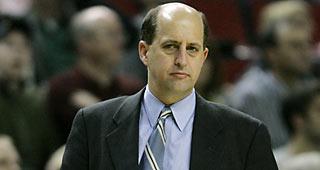 Jeff Van Gundy was one of three finalists for the Houston Rockets' head coaching job after long being considered the favorite. But the Rockets ultimately decided to hire Stephen Silas for the job and the reason could have pivoted on Houston's stars not supporting Van Gundy's candidacy to the degree that would have made all parties comfortable.

"Van Gundy, I don't know if there was a lot of buy in or any buy in from James Harden or Russell Westbrook," said Tim MacMahon on the Brian Windhorst podcast. "And I don't know if Jeff Van Gundy necessarily wanted to, you know, have to beg to coach guys. And so I think personality wise, that might not have been a match."

"I get it. I give the man credit for tap dancing around," said Bontemps.

"He's doing a good job. Is this mic on? I thought we were on mute. Go ahead, MacMahon," said Windhorst.

"We could just say Van Gundy was considered the lead candidate all season long, I think that the most important decision maker for the Rockets wasn't quite so sure about that one," added MacMahon.

Van Gundy is a longtime analyst for ESPN and ABC and will remain in the role.