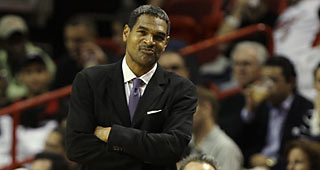 Cheeks, who grew up in Chicago, was part of Donovan's staff with the Thunder for the past five seasons.