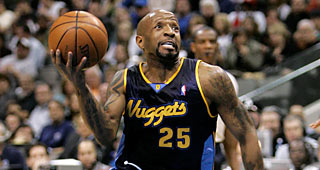 In 2003, agent Bill Duffy infamously failed to notify the Miami Heat that his client, Anthony Carter, would exercise his $4.1 million player option for the 03-04 season. Carter was coming off a disappointing season and the contract was significantly more than he would make on the open market as he signed a minimum contract with the San Antonio Spurs for approximately $750,000.

Duffy agreed to make Carter whole for the mistake by paying him $3 million out of his own pocket through an agreed-upon payment schedule. Duffy made the last of those payments this year with Carter confirming he's been made whole.

Carter said he never considered firing Duffy for the mistake.

“I wasn’t even mad, to tell you the truth,” said Carter, who is now back with the Heat as an assistant coach. “I didn’t think anything of it until lawyers and stuff called. I didn’t jump to any conclusions. I didn’t say, ‘What happened?’ Because I knew what type of person he was. Things happen.”

The Heat unexpectedly had cap space to sign Lamar Odom, who was the centerpiece of a trade for Shaquille O'Neal one offseason later. Miami won the title in 2006 with O'Neal and Dwyane Wade leading the team.

“When this happened, I was hearing from a lot of people because I took responsibility,” Duffy said. “I took ownership of it and took care of it and he was taken care of.

“I’ve had Wall Street people call me and say: ‘Man, that happens all the time. Everybody tries to hide from it. They try to pass the buck. You stood up for it. You took care of it.’ I actually gained a lot of respect from people.”