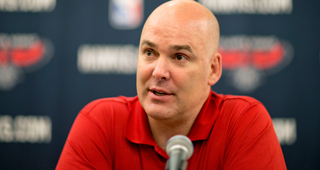 The San Antonio Spurs will hire Danny Ferry for a consulting role. San Antonio will also hire Samson Kayode in a player personnel role and Hao Meng as Director of Strategic Analysis and Basketball Insight.

Ferry began his basketball executive career with the Spurs. Ferry was most recently with the New Orleans Pelicans and previously ran the front offices of the Cleveland Cavaliers and Atlanta Hawks.

Kayode spent the last four years as Assistant Director for the USA Basketball Men’s National Team, where he assisted in all facets but primarily focused on developing the Men’s Junior National Team program. Prior to joining USA Basketball, he spent two seasons from 2014-16 as the Video Coordinator for the Detroit Pistons after serving as a video intern for the Golden State Warriors from 2012-14.

Meng joins the Spurs after spending the last seven-plus years at the NBA league office, most recently as Associate Vice President of Basketball Strategy and Analytics. He started with the NBA as a Manager of Team Finance in 2013 before being named Associate Director of Basketball Strategy in 2016. Prior to joining the league office, Meng worked as an investment banking financial analyst at Goldman Sachs for two years after graduating from Harvard in 2011.