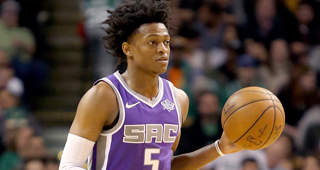 The Sacramento Kings have benched Nemanja Bjelica as they look to build around De'Aaron Fox, sources told Jason Anderson of The Sacramento Bee.

Bjelica has not played in the last six games after discussions surrounding his playing time.

The team has cited personal issues for his absence, though sources around Bjelica say he has no issues.

The Kings explored trading Bjelica around the draft, looking to add players who fit Fox's timeline.

The Sacramento Bee adds that the team is likely to continue to explore trades for Bjelica.