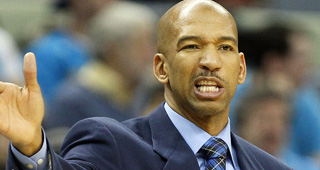 Monty Williams has been named the 2021 recipient of the Michael H. Goldberg NBCA Coach of the Year Award, the National Basketball Coaches Association announced today.

The Michael H. Goldberg NBCA Coach of the Year Award recognizes the dedication, commitment and hard work of NBA Head Coaches and is presented annually to a Head Coach who helps guide his players to a higher level of performance on the court and shows outstanding service and dedication to the community off the court. It honors the spirit of Mr. Goldberg, the esteemed long-time Executive Director of the NBCA, who set the standard for loyalty, integrity, love of the game, passionate representation and tireless promotion of NBA coaching. The award is unique in that it is voted upon by the winners’ peers, the Head Coaches of all 30 NBA teams.

The depth of coaching excellence in the NBA is reflected in this year’s voting as a total of 7 Head Coaches received votes. In addition to Williams, the following also garnered votes: Scott Brooks, Michael Malone, Nate McMillan, Doc Rivers, Quin Snyder and Tom Thibodeau.

“Congratulations to Monty Williams on this most deserving recognition,” said Dallas Mavericks Head Coach and NBCA President Rick Carlisle. “In just two years, Monty has taken the Suns from a 19-63 team to the second-best record in the NBA this season and the Suns’ first Divisional title since 2007. To win the vote of our peers makes the Michael H. Goldberg NBCA Coach of the Year Award one of the most meaningful in all of pro sports.”