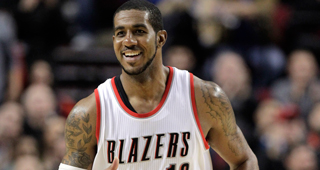 LaMarcus Aldridge had some of his greatest success with the Portland Trail Blazers, but he left the franchise in 2015 to sign with the San Antonio Spurs. In an interview with Shams Charania of The Athletic, Aldridge reflected back on some of the reasons why the partnership with the Blazers didn't work out as well as it could have dating back to when he was drafted in 2006 and his subsequent relationship with Damian Lillard.

"They say hindsight is 20/20," said Aldridge. "As you get older you get more wiser and you see things more clear. I think as you get older, you have less of an ego, you’re less sensitive. Maybe all those things are true. The only thing I look back on is I wish I would have worked at it better to have a relationship with Dame (Lillard). I feel like we both had our circles talking to us. Maybe that helped stifle our relationship, but we definitely have gotten a better relationship since then. But I think just trying to get a better relationship with him. It’s just tough because people see the career I had, but people don’t realize how I got there.

"I was picked No. 2, but (team people) said I was an actual project. So they didn’t pick No. 2 and say, ‘Hey, he’s our guy, we’re going to play behind him.’ I was No. 2, and I didn’t even play much my first year. I missed camp. They jumped behind Brandon Roy. I was the No. 2 pick, which I thought, hey, I’m No. 2, they’re all in. But they weren’t really all in. I was on the back burner. And then we got Greg (Oden). So then when Greg was playing well, I was on the back burner again. And they tried to trade me. So I wasn’t the guy that they believed in right away. That’s why at times things were a little iffy there, because every time we were healthy with Andre Miller and Brandon Roy and Greg Oden, it was like … OK, I was more of the guy that they would put on the back burner or try to trade. And then all those guys got hurt, and I was thrown to the front out of a necessity. That’s when I finally got my opportunity to be who I became. It’s just funny to me how when you’re a No. 2 pick, most of those guys come in … Hey, you’re a part of this and have opportunities. With me, it was like … I was a project and I was like, well, who picks No. 2 as a project? I understand they have Zach Randolph.

"So my start wasn’t ideal. I was always the easy one to try to get rid of. Unfortunately, those guys got hurt, and I became the man. And it was like: Oh, man, he’s good. I feel like if they would have gave me the opportunity earlier, we could have been even better earlier. My role wasn’t as easy as everyone might think it was. I had to really go earn this thing of having your own team. I had to go fight for that for a bunch of years. When I got it, it was a proud moment for me.