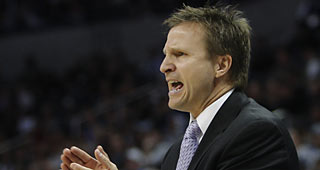 Washington Wizards general manager Tommy Sheppard said on Thursday that the team has yet to make a decision on the future of Scott Brooks.

"We are not doing anything about that today. We obviously are going to do a thorough evaluation from top to bottom of our whole organization and ways we can get better. But any questions about that stuff, that is not for today," said Sheppard.

The 55-year-old Brooks finished the final year of his contract this season.

Brooks stated that he wants to return as the Wizards coach, drawing support from Russell Westbrook.

Sheppard also added that he plans to continue building around Bradley Beal.

"We have built this team around Bradley, and that is our intention moving forward," Sheppard said. "I think he is positive about moving forward in the future."