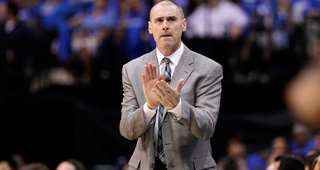 Rick Carlisle abruptly stepped down as head coach of the Dallas Mavericks on Thursday and he's emerged as one of the top available candidates for current vacancies. There could also be an additional vacancy involving Mike Budenholzer and the Milwaukee Bucks should they not advance to at least the Eastern Conference Finals.

"Reading the tea leaves, there's a couple things there," said Tim MacMahon on The Hoop Collective. "Number one, I do think that Rick realized just how hot his seat would be to start next season. I'm half kidding I say I thought he'd be fired by Christmas, but he resigned by Father's Day instead.

"That's number two," continued MacMahon. "I know Rick Carlisle very well. He's obviously an extremely intelligent man. He's a planner. He's a plotter. He's a pilot. Rick's plane has a parachute. If he wants to hit a button, it has a parachute. Rick ain't going up in the air without a parachute. He's not jumping off the plane unless he has a really sturdy parachute... Read the statement Rick gave to [Adrian Wojnarowski]... He has something lined up.

"There's two destination that are heavily rumored. The first you just mentioned is the Bucks. If Bud goes, Rick moved in there would immediately allow him to take over a championship contending team."

"There's a lot of smoke about a potential Rick Carlisle reunion with the Pacers," said MacMahon. MacMahon indicated that he hasn't heard that rumor from anyone directly involved. Carlisle was head coach of the Pacers from 2003 until 2007.