Stan Van Gundy: Zion Williamson Didn't Have Anything To Do With Dismissal 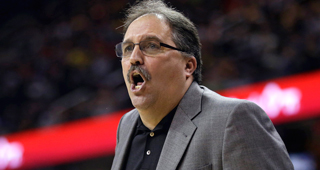 In his first public comments since he was fired as head coach of the New Orleans Pelicans, Stan Van Gundy said he doesn't believe Zion Williamson, Brandon Ingram or any other player contributed to his departure.

"I hate when it gets put on players that players are getting coaches fired and things like that. I think that makes players look bad and I don't think that's fair," Van Gundy said on the "Stupodity" podcast. "Players certainly have the right to express their opinion to people and things like that but front offices and owners make decisions and they are the ones who make decisions to fire people. That should never be placed on players.

"I know this, regardless of what happened in that regard, Zion's no coach killer. He's a guy who is gonna help you win a lot of games. He plays the game the right way. One of the things I'll miss is the opportunity to continue to coach him. He's so unique in the way that he plays the game and the things that he can do, it really gets your mind spinning as a coach and you have a lot of possibilities in what you can do with him. That was fun to explore. I'm happy with what we did with Zion. I think we helped him. How anyone else felt about that would be up to them."