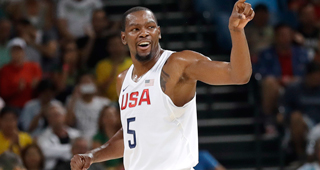 Team USA completed a second straight dominating performance, as they rolled past Czech Republic 119-84. The United States was trailing 25-18 after the first quarter. The US then turned up the defense and got their offense rolling in the second half. After the break, USA had a 72-41 scoring margin.

Kevin Durant became USA Men's Basketball's all-time leading scoring in the victory. His 23 points pushed him past Carmelo Anthony for the top spot on the list.

Zach LaVine, Jrue Holiday and JaVale McGee all scored in double-figures for the US.

Tomas Satoransky of the Chicago Bulls had 12 points, six rebounds and eight assists for Czech Republic.

The United States now moves on to the knockout phase of the Olympics. Their first opponent in tournament play will be determined after group play finishes early next week.