Lakers' Offer To Alex Caruso Was 'Not Close' To Chicago's 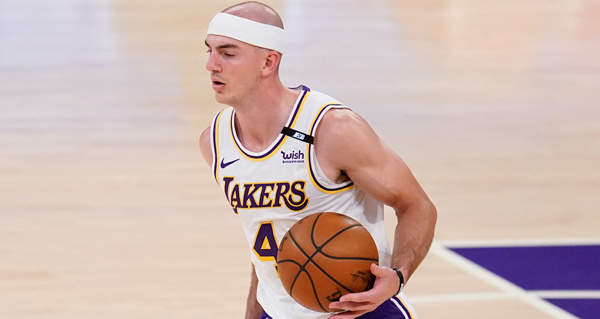 The Los Angeles Lakers lost Alex Caruso to the Chicago Bulls on a four-year, $37 million deal.

"From what I have heard and from what you have heard, the Lakers' offer was not close, which belies some luxury tax concerns," said Zach Lowe to Ramona Shelburne on his podcast.

Lowe recorded the podcast before the Lakers finalized their offseason by signing Talen Horton-Tucker, Kendrick Nunn and Malik Monk to round out their backcourt.

The Lakers were able to sign Horton-Tucker to a similar offer as the Caruso one with Chicago, albeit for $7 million less over three years. Horton-Tucker also has more upside as a shot creator and is younger.

Shelburne also adds that the Minnesota Timberwolves offered to acquire Caruso on a sign-and-trade in which they would have also taken on Marc Gasol from the Lakers.

Sam Amick of The Athletic reported on his podcast that Caruso took his four-year, $37 million offer from the Bulls back to the Lakers and his incumbent team had no interest in matching.

Shelburne added on the Brian Windhorst podcast that the Lakers' best offer was for approximately $7 million per season. Caruso was willing to sign with the Lakers for $30 million over four, which is similar guaranteed money as he signed with the Bulls.