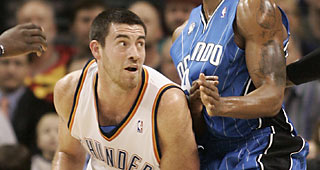 In his new role, Collison will continue to enhance his front office acumen while working closely with Presti and other key front office personnel on short-term and long-range initiatives and projects for the Thunder across many facets of basketball operations.

Prior to taking on his current position, Collison served the past two seasons as Basketball Operations Representative for the Thunder. In his previous role, Collison had touchpoints throughout the organization and the opportunity to develop his basketball operations skillset following his 14-season playing career with the Thunder franchise.