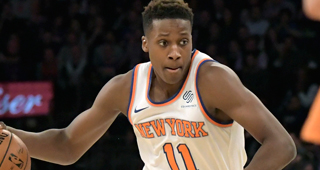 The Dallas Mavericks are expected to sign Frank Ntilikina in the coming days.

The Mavericks were strongly linked to Ntilikina ahead of the 2017 draft, but he instead went to the New York Knicks at No. 8. The Mavericks selected Dennis Smith Jr. at No. 9 and he was subsequently traded to the Knicks in 2019.

Ntilikina appeared in 33 games last season with the Knicks.