Growing Belief Gregg Popovich Will Retire After This Season 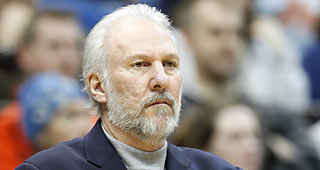 There is a growing belief that San Antonio Spurs Gregg Popovich will retire following the 2021-22 season. Popovich has remained non-committal to his coaching future, only saying that he's excited to coach the young Spurs this season.

Whenever Popovich does retire, San Antonio has a wide array of potential replacements. Former Spurs assistant Will Hardy was thought to be the heir apparent, but he moved from the Spurs bench to the Boston Celtics this offseason. Former players Tim Duncan and Manu Ginobili have also been mentioned. It's unclear how much Duncan wants to coach, while Ginobili just recently returned to San Antonio.

Becky Hammon is also expected to receive consideration. Hammon has been with the Spurs the second-longest of any assistant, and has been interviewed for several other head coaching jobs in recent years.