Joakim Noah: To Be A Coach You Have To Be A Little Sick 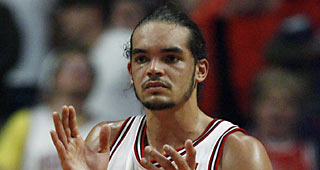 Joakim Noah was honored by the Chicago Bulls during Thursday's game against Tom Thibodeau's New York Knicks on the same day he was named an ambassador for the franchise.

Noah said he misses the NBA, but "feels a lot less anxiety" and sleeps better.

Noah also said he has no interest in coaching.

"To be a coach, you have to be a little bit sick," Noah said, "When you're not feeling it, you have to motivate a group of men to get a job done. That's a tough job."