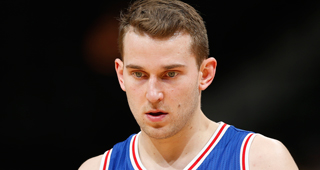 The Miami Heat will sign Nik Stauskas to a 10-day hardship exception deal.

Stauskas was with the Denver Nuggets in the preseason. Stauskas previously agreed to sign with the Toronto Raptors on a 10-day, but was unable to join the team due to health and safety issues.

Stauskas last played in the NBA during the 18-19 season with the Cleveland Cavaliers and Portland Trail Blazers.