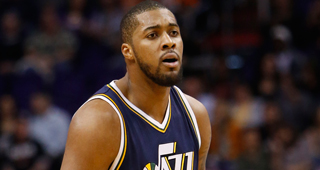 Derrick Favors may have only appeared in 39 games for the Oklahoma City Thunder, but that doesn't mean he's looking to leave town this summer. At his exit interview, Favors indicated he's likely to pick up his $10.2 million player option for next season.

“Yeah, I expect to be back here next year. Yeah, I’ll probably pick it up," Favors said about his option.

It should come as no surprise Favors plans to opt in. The 12-year veteran big man is unlikely to recoup that sort of value as a free agent.

After opting in, it's likely the Thunder will explore trades for Favors. They took a similar approach with veteran big man Al Horford.