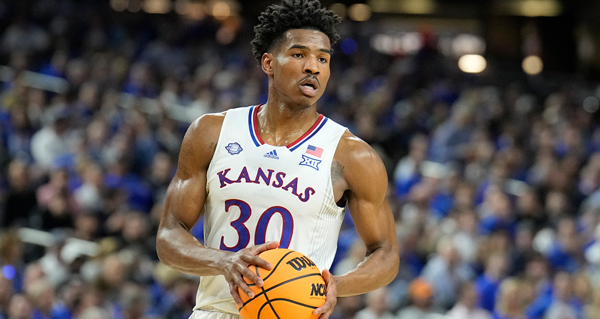 Kansas senior Ochai Agbaji has declared as an Early Entry candidate for the 2022 NBA Draft. Despite being a senior, Agbaji had to declare for the draft, because the NCAA has granted all players an additional year of eligibility due to the COVID pandemic.

Agbaji was named the Most Outstanding Player of the Final Four, after leading Kansas to the 2022 National Championship. For the season, the 6-foot-5 wing averaged 18.8 points and 5.1 rebounds per game.

Agbaji has great improved his shot in his four years with the Jayhawks. As a senior, he shot 47.5% from the floor, including 40.9% from behind the arc on 6.5 three-point attempts per game.

Most draft experts project Agbaji as a late-first to early-second round pick. One of the knocks against him is that he doesn't have elite size on the wing, and he's already 22-years-old.