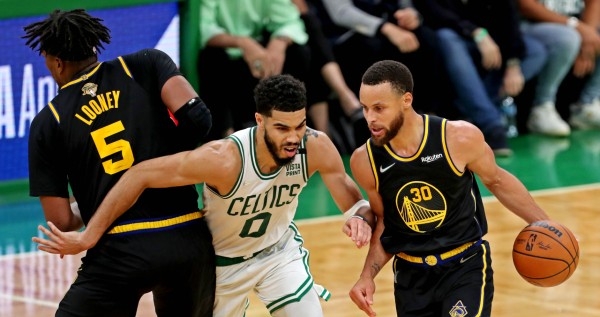 After four games in the NBA Finals, we’re no closer to crowning a champion. With the Golden State Warriors and Boston Celtics tied 2-2, the series has now become a best-of-three showdown, with Game 5 taking place Monday night in San Francisco.

The Warriors staved off a devastating 3-1 deficit with 43 points from Steph Curry in Game 4, and now it’s totally up for grabs. NBA betting sites feel the same way: The Warriors are just slight favorites (-140) over the underdog Celtics (+120).

The Warriors are -3.5 on NBA point spreads in Game 5, but Boston should feel confident after earning a Game 1 win at Chase Center. The Celtics are also an NBA-best 7-0 SU this postseason after a loss.

Then again, it’s the Warriors at home. That speaks for itself. What we’re saying is this one is going to be good.

Boston on the road vs Golden State at home

It’s obviously great to play at home in the postseason. Home teams this postseason are 51-34 SU. And while the Celtics are no longer the up-and-coming youngsters, there’s still something to be said for postseason experience when it comes to a make-or-break Finals matchup.

The Warriors at home this postseason? 10-1 SU on betting sites with a remarkable +12.5 net rating. They’re also 8-3 ATS (they were favored in all 11 games). Those are dominant numbers, no matter how you slice it.

But then there’s the road Celtics. Consider that Boston is 8-3 on the road this postseason (no other team has more than four road wins) with a +4.8 net rating. They’re a ridiculous 9-2 ATS on betting apps, too.

And it’s not like this just started in the postseason—the Celtics are 34-17-1 ATS on the road, the best win percentage in the NBA (66.7%) and the most total covers. This is an unstoppable force meeting an immovable object. What will give?

Keep an eye on that under

We mentioned that the prolific scoring in Game 1 shouldn’t put you off backing the under. And since then, it’s been a much more defensive series. Games 2 and 4 went under by a whopping 18 (Game 2) and 9 (Game 4) points. The over that hit in Game 3 did so by just three points.

So, yes. The under is “only” 2-2. But these are the two best defenses in the NBA by a long shot. Despite all the great scorers available in this series, defense has been the calling card. We believe that will be the case the later we go in this series.

Things tighten up, possessions are more valued, and the game shortens. It’s 2-2 right now, but the under should reign supreme by the end of the series.

Steph Curry is locked all the way in

Unless you’ve been living under a rock, you know that Steph Curry is in the NBA Finals for a sixth time and has yet to win an NBA Finals MVP. He’d undoubtedly win this time around if the Warriors can win two more games, so if you’re in on the Warriors, you should be in on Curry.

His points and rebounds feel like great bets. He understands that now is the time for him to take over and earn himself a fourth ring (and a first Finals MVP). He’s clearly not feeling any lingering effects from his scare in Game 3. This is his time to take over.

This series really has gone back and forth. They’ve traded victories and now we’ve arrived at the decisive Game 5. With the series tied 2-2, teams that win Game 5 of the NBA Finals go on to win the championship 73% of the time (22-8).

It’s not wrong to say the series is on the line Monday night in Golden State. And we’re backing the Warriors. We can’t look past how incredible they’ve been at home this postseason. It’s great that the Celtics respond well to losses, but that’s unsustainable—we think.

A massive Game 5 feels like the time for it to happen. Throw in a red-hot Steph Curry (50/49/86 shooting) and you’ve got your winner. Hammer the Warriors, and also continue tailing the under. Both will pay out on Monday.