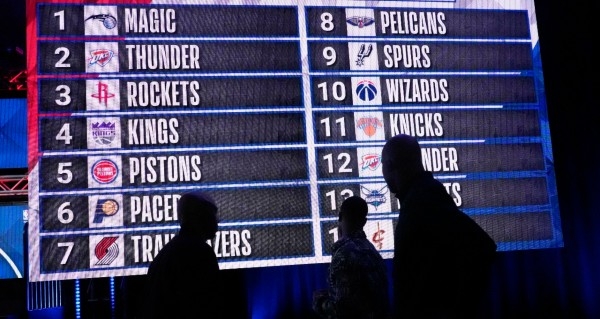 There hasn’t been this much unknown at the top of the NBA Draft since 2017, when the Philadelphia 76ers opted for Washington guard Markelle Fultz over Lonzo Ball and Jayson Tatum. Whether the Orlando Magic opt for Jabari Smith, Chet Holmgren or Paolo Banchero with the top pick on Thursday night at the Barclays Center in New York should provide plenty of intrigue, surprises and trades.

Sports betting apps everywhere have uploaded hundreds of different NBA Draft odds—from top pick to whether a player will be drafted in the first round to which player certain teams will take with their first selection. So, while you’re tuned in Thursday night to see where this year’s class is headed, consider placing bets on our favorite 2022 NBA Draft odds.

For starters, here’s a look at the top pick odds from BetMGM. A reminder, the BetMGM   bonus code REALGM unlocks a $1,000 risk-free first bet.

RealGM readers know all about Johnny Davis, the 6-foot-5 All-American from Wisconsin who can score at all three levels. He may not have the freakish athleticism or length of some of the prospects in his tier, but there’s something to be said for his scoring prowess and defensive ability.

NBA coaching will improve his 3-point shooting, and we believe he’s one of the most NBA-ready players in this class. Teams like the Pelicans (8th), Spurs (9th), and Wizards (10th) are all trying to win now. One will take a shot on Davis’ potential. Keep in mind that the Caesars  Sportsbook promo code REALGM15 delivers a risk-free first bet up to $1,500, so you have some insurance if you are a new bettor.

Let’s get wild with our second bet. This is obviously one that you should place less money on than the others, but it’d be lucrative if it wound up hitting. And with the BetRivers promo code offer matching your first deposit up to $250, you could use free bet credit here.

Here’s the logic as of this writing: The Magic are likely going with Jabari Smith at No. 1, but the Oklahoma City Thunder are always an enormous wild card. GM Sam Presti always has something up his sleeve. So, whether he believes Jaden Ivey is the next Russell Westbrook, or that Paolo Banchero’s playmaking ability could make him a miniature version of LeBron James, we’re not sold on Chet Holmgren at No. 2 just yet.

Of course, the team drafting third (currently Houston) would swoop Holmgren up in an instant. The most likely outcome is Holmgren becoming the next Thunder project, but we have a feeling that’s not a lock.

We love what Jeremy Sochan brings to an NBA team — he’s a heady player who plays downhill and can guard multiple positions. But he also shot just 30% from deep and he’s not a significant playmaker. That’s less of a knock on his talent and more an indication that he may hear his name called toward the later stages of the Lottery.

The top seven or eight picks seem locked in, leaving just a few slots for Sochan to jump up into the top-11 and go under here. We’ll grab these odds from Caesars and play the over.

Sometimes the obvious pick is the right one. That’s true for NBA general managers and sports bettors. This year’s class is top-heavy with three bigs in Jabari Smith, Banchero and Holmgren. It gets a bit cloudy after that, but most agree that Purdue guard Jaden Ivey is the fourth best prospect in the class. The Kings currently own the fourth pick and should take the best player available. And if Sacramento does trade out, a team trading up to 4 would take the top prospect. That’s Ivey.

Wendell Moore to be Selected in First Round

Duke wings know a thing or two about success at the NBA level. After breaking out as a junior for the Blue Devils — Moore averaged 13.4 points on 50% shooting and better than 41% from deep—we think he’s a first-round lock. He has reportedly impressed in workouts and is still just 20 years old despite playing three seasons at Duke.

Wings matter in the league, and Moore’s 7-foot wingspan is screaming potential. This isn’t an overly deep class, so the boxes that Moore checks (elite program, production, length, NBA-ready) will matter at the end of Round 1. We think he could go as early as No. 20 to San Antonio. Regardless of where he winds up, it will be long before the 31st pick is called.

E.J. Liddell is a rock-solid prospect who averaged 2.6 blocks per game as a junior. He also made 37% of his shots from beyond the arc. That combination from a player who will turn 22 a few months into his NBA career screams second unit forward for a championship contender.

We’re looking at Memphis (22), Philadelphia (23), Milwaukee (24) and Miami (27) as potential landing spots. Note that none of those slots are before 21. He’s an older prospect and doesn’t have outstanding athleticism. He’s a high floor guy but not necessarily a high ceiling prospect. Somewhere in the mid-20s feels right.