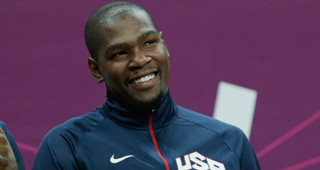 Steve Kerr is taking over the reins from Gregg Popovich as the head coach of USA Basketball. Kerr is hoping a familiar face will join his squad at the 2024 Olympics in Paris.

Kerr joked that he'd make a "recruiting pitch" to Kevin Durant of the Brooklyn Nets to join Team USA for another run. Durant and Kerr were previously together on the Golden State Warriors. Durant has said it's too early for him to commit to playing in the next Olympics.

Durant has played for Team USA in three different Olympics. He's helped lead the United States to the gold medal in the 2012, 2016 and 2020 (played in 2021) games. Durant is also the all-time leading scorer in Team USA history.