One And Done Model Works For Everyone 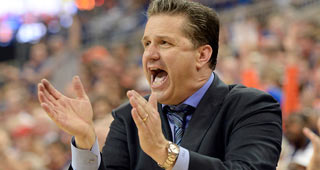 While Kentucky came up just short against UConn on Monday, their run to the national championship game completed a remarkable five-year stretch for John Calipari. Since coming to Lexington, Calipari is 18-3 in the NCAA Tournament. Even more remarkable, he compiled that number with four completely different teams, sending upwards of 15 players to the NBA. It’s a vindication not only of how he built his program, but of the entire “one and done” model.

The NBA didn’t institute the rule for altruistic reasons. They are a remarkably cheap organization that doesn’t want to pay for the development of their talent base, preferring to pawn as much of it on the colleges as they can. Just as important, forcing players to spend one season in college allows them to make a better evaluation of their pro ability. For all of Kentucky’s success, this season revealed holes in the games of its players that high school and AAU ball couldn’t.

Nevertheless, the rule has been a win-win for everyone. While some of the traditionalists of the sport might disagree, one-and-done has clearly been a boon for college basketball. Interest in the NCAA Tournament is as high as it’s ever been and the five classic games Kentucky played is one of the biggest reasons why. Just compare the level of intrigue surrounding UConn’s victory over Kentucky in 2014 as opposed to their victory over Butler in 2011.

Under Calipari, the Wildcats have embraced an us against the world mentality that makes them a natural villain and a compelling antagonist. They are the Oakland Raiders of the 21rst century - hate them or love them, everyone has an opinion. When you play against Kentucky, the basketball world is watching. Cleanthony Early went from a fringe second-round pick to a fringe first-rounder based off scoring 31 points against the Wildcats frontline.

Upsets are always the big story of the first weekend of the Tourney, but as you get deeper into March, you want the natural order to reestablish itself. What would David be if not for Goliath? Kentucky is the measuring stick that every other program in the country can compare itself to - beat Calipari and you put yourself on the map. Two of his three losses in the NCAA Tournament have come against teams that went on to win the national title.

And while the popular perception is a guy who just rolls the basketball out on the floor every year, this season should have put those notions to bed. Calipari just went toe-to-toe with Gregg Marshall, Rick Pitino, John Beilein, Bo Ryan and Kevin Ollie - you don’t beat coaches like that if you don’t know what you are doing. He knows the right buttons to push, in terms of instilling team play and making the correct adjustments over the course of a game.

As long as Calipari stays in Lexington, Kentucky isn’t going anywhere. For all the hype this year’s recruiting class got, I think next year’s class is even better. Julius Randle and James Young are gone, but as long as one of the Harrison twins comes back to school, the Wildcats will start a McDonald’s All-American and NBA prospect at every position. Karl Towns, Trey Lyles, Devin Bookert, Tyler Ulis - NBA fans will be hearing those names soon enough.

Of course, there’s no question that Calipari’s players are being exploited on some level. Towns is only 18 years old and he could play in the NBA right now. A skilled and athletic 7’0 250 big man, he could have been a professional at the age of 15 or 16. That’s how they do it in Europe - Tony Parker, Tiago Splitter and Jonas Valanciunas were all cashing checks when they were still going through puberty. All of those guys seem to have turned out alright.

If you aren’t going to let young basketball players operate in a completely free market, where professional teams are forced to bid for their services, forcing them to spend a year in college doesn’t seem like that much more of an imposition. What’s really the dividing line between 18 and 19 years old? Well-meaning reformers who want the NBA to eliminate the one-and-done rule are missing the forest through the trees  - the rot starts way deeper than that.

The league has its own financial reasons for setting up the draft the way they do and they aren’t going to change them because it makes Mark Emmert feel like a hypocrite. Every coach in the country would happily take Calipari’s players if they could. It’s not like he’s doing them a disservice - he puts them in a position to rack up statistics, win games and become high draft picks. For the most part, his players do well in school and start on the road to degrees.

They aren’t risking all that much in college - Nerlens Noel tore his ACL and he was still taken with the sixth overall pick. Medical science has made tremendous advancements over the last generation. If an injured guy has the talent to succeed at the next level, an NBA team will have no problem paying him a few million dollars while he recovers. Was Anthony Davis better off losing 60 wins on a team like the New Orleans Pelicans or winning a national title at Kentucky?

When Randle, Young and the Harrisons are old men looking back on their careers, they will remember these last six weeks as fondly as anything that happens to them in the NBA. Looking back, is it that big a deal that Kevin Durant has spent eight years with the Oklahoma City Thunder instead of 9? Carmelo Anthony gave $3 million to Syracuse for a practice facility - the players are getting something out of the experience that lasts with them in the NBA.

One way or the other, the best players will eventually make it to the NBA. In an ideal world, the current structure of youth basketball would not exist, but that is far from the world we live in. If being forced to wait an extra year in college before they become multi-millionaires is the worst thing that ever happens to Julius Randle or James Young, they had a pretty good life. Playing college basketball for a year isn’t so bad - if you don’t believe me, just ask them.