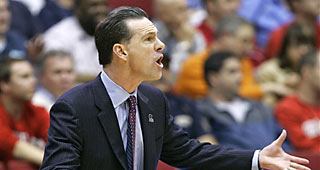 Blind Resume Test: Imagine a veteran coach who has finished in the Top-2 in a BCS conference in four of the last six years. His team is constantly in the Top-25, but struggled last season thanks to a key injury. This year, his team brings in a consensus Top-10 recruit nationally, one of the nation’s top transfers, and as a whole the team has seven former RSCI Top 100 recruits on the roster. Is this a top-25 team?

The team in question is the Pitt Panthers. And after last season’s disappointing 5-13 Big East record, I will understand if you are skeptical. But the numbers suggest that last year was a fluke, and not the beginning of a decline for Pittsburgh. First, let’s correct a few misnomers.

Point guard Travon Woodall missed 11 games last year due to injury, returned for one game in the middle of the injury and was ineffective against Notre Dame. With Woodall out, Pittsburgh played terrible basketball performing like the 110th best team in the nation. His absence caused Pittsburgh to start 0-6 in Big East play, and while a brief winning streak made things interesting, the Panthers simply lacked the continuity to rally for an NCAA bid.

2) Pittsburgh doesn’t have the elite athletes to compete at the highest level.  - False

While Syracuse has recruited more RSCI Top 100 recruits over the last four years than Pittsburgh, more Syracuse players have left for the NBA. And that means Pittsburgh actually has more former Top 100 prospects on its roster currently. I’ve sometimes referred to Pittsburgh as the Wisconsin of the East, because they seem to compete for conference titles even without elite talent. But because players like Dante Taylor, Talib Zanna, and JJ Moore have stuck around for a few years, Jamie Dixon has suddenly assembled a team of players that were almost all considered elite athletes coming out of high school. (See the RSCI rank in the table below.)

You might not care about that. You might simply assume Pittsburgh has a team of busts. But former Top 100 recruits that don’t blossom early, often blossom later in their careers. Last year Florida St.’s Michael Snaer, a former Top 20 RSCI recruit, went from being a two-guard who couldn’t make free throws to one of the most efficient players in the nation. Once Snaer’s shot caught up with his athleticism, the sky was the limit. On paper, Dante Taylor looks like a potential late blooming star for Pittsburgh. Meanwhile JJ Moore’s outside shooting improved tremendously between his freshman and sophomore seasons. If Moore’s shooting improves again in year three, he is also the type of former elite recruit who could take Pittsburgh to that next level.

Despite all of Pittsburgh’s troubles last season, they were a Top 25 offensive team. And Travon Woodall is going to have even more fun dishing the rock this year. First year center Steven Adams is projected as a Top 10 pick in some 2013 NBA mock drafts, and he has the body size and touch to dominate in the paint. His physical presence should also open up the paint for either Dante Taylor or Talib Zanna. Meanwhile on the perimeter, Trey Zeigler joins the team after transferring from Central Michigan. Zeigler is a high volume shooter who should see his efficiency improve as he no longer has to carry the full load for his team. Zeigler should provide a much-needed option when the offense slows down because of his ability to create his own shot and get to the free throw line. Add Lamar Patterson, Pittsburgh’s most consistent returning player, JJ. Moore and John Johnson knocking down threes on the perimeter, and elite freshman recruit James Robinson and you have the potential for an extremely effective offensive team.

For years, John Gasaway has been pointing out that Jamie Dixon wrongly inherited Ben Howland’s reputation as a defensive mastermind. Dixon has depended far more on his ability to teach offensive rebounding and other key offensive skills than his ability to teach lock-down defense. But even if that is true, last year looks like a huge statistical fluke. In his first 8 seasons, Dixon’s worst adjusted defense was 92.2. Last year his team’s defensive rating was 100.3. I have to believe, if Dixon does nothing else this season, he will correct that side of the ball.

I haven’t charted Pittsburgh’s defense excessively, but Pittsburgh did have difficulty defending quicker perimeter players last year. As much as Ashton Gibbs brought to the table, his four-year steal rate was exceptionally low. And when Travon Woodall was out, Pitt’s defense was worse. That tells me Pittsburgh lacked a defender to lock down on opposing point guards. With a healthy Woodall and the versatile Zeigler joining the team, Pitt should at least have players with the quickness to keep opposing point guards in front of them. (Getting them to become lock-down defenders is still up to Dixon.)

But the real problem with these perimeter breakdowns was that Pitt didn’t have an intimidating option in the paint to bail the team out. The 6’5” Nasir Robinson was asked to defend opposing forwards in most games, and this year’s team will benefit from the increased size Steven Adams (and a developing Malcolm Gilbert) bring to the team.

Below I provide some potential predictions for the Pitt lineup this season based on the historical data. I’m still tweaking my predictions model, but here is some intuition on the Pittsburgh numbers. First, Talib Zanna appeared to pass Dante Taylor in the Pittsburgh rotation last year. But Zanna still lacks the upside of Taylor. Even if you doubt that #13 RSCI Rank next to Taylor’s name, there are other reasons to think Taylor has more upside. For example, Taylor is a more dominant shot-blocker than Zanna, Taylor is a better offensive rebounder, and that all speaks to Taylor’s higher overall level of athleticism. Taylor also had much better efficiency numbers as a sophomore, and that is why I expect a big efficiency rebound this season.

Lamar Patterson may very well play 80% of the minutes for Pittsburgh and be the team’s leading scorer this season, but my model is actually a little cautious. This is because Patterson was not an outside shooter prior to last season. Perhaps his 41 of 100 threes last season mean he has become a dominant scorer, but Patterson made just 8 of 36 threes of a sophomore, and we have to be concerned that last year might have been a little bit of an outlier. On paper, Ziegler and freshman James Robinson could still cut into Patterson’s minutes.