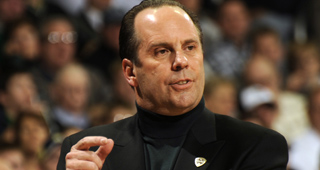 This week the Boston Celtics announced Brad Stevens as their new head coach. It was a move that made a lot of sense for Stevens. The former Butler coach loves the X’s and O’s of the game, but doesn’t have nearly the same love for recruiting battles. In the NBA, for better or worse, he will have to deal with the talent he has on hand. His job will be to maximize that talent, not to attract it to town.

But this does make the situation at Butler more bleak, at least in the short run. With Andrew Smith and Rotnei Clarke graduating, Butler was going to depend more than ever on Stevens’ basketball knowledge next season. The team probably has the seventh to ninth most athletic roster in the Big East next season. And whoever takes over at Butler may not have Stevens’ magic touch with three star recruits.

Speaking of recruiting, that was a topic I wanted to talk about today, at least tangentially. Today I am updating a table I first presented 18 months ago. The table shows D1 coaches in major conferences and how willing they are to give minutes to freshmen. To no one’s surprise, John Calipari and Rick Barnes show up at the top of this list. Both coaches have been willing to give major minutes to first-year players. On the flip side coaches like Bruce Weber, Bo Ryan, Mike Brey, and Buzz Williams have been unwilling to use freshmen in their rotation. When I ran this table 18 months ago, I called it the “anti-recruiting tool” because for these coaches the lack of commitment to fist year-players could be a detriment on the recruiting trail.

Elite recruits want to showcase their game for NBA scouts, and a large part of recruiting is promising elite players the chance to play right away. When a coach like Bo Ryan has been known to red-shirt McDonald’s All-Americans, that likely prevents Wisconsin from competing for some of the top high school athletes.

The following table shows major conference coaches with at least 5 years of D1 coaching experience and the average number of minutes they have given to freshmen during the last 11 seasons. I include all schools where the coach was employed as a head coach. I.e. this table includes John Calipari’s time at Memphis as well as his time at Kentucky.

There are a lot of things one can learn from this table. For example, this is one of the reasons Bo Ryan, Mike Brey, Stew Morrill, and Buzz Williams are able to churn out elite offenses year-after-year without superior athletes. Their teams simply avoid freshmen mistakes.

The reason I am looking at these numbers again is to see whether I should add these type of coaching roster choices into my predictions model. Clearly, some knowledge of a coaches’ lineup preferences should matter for next season's prediction. For example, Temple loses a devastating amount of production this off-season. But these numbers make it seem unlikely that Fran Dunphy will go young and accept a rebuilding year. Instead, Dunphy will likely look to expand the playing time of last year’s bench players.

But most importantly, I want to use these numbers to understand whether prized freshmen recruits are likely to play a lot of minutes. Looking at this table, I think we can be confident that Florida’s prized freshman PG Kasey Hill is going to start right away and play major minutes. But what about Top 100 PG recruit Duane Wilson who is headed to Marquette? Given incumbent PG Derrick Wilson’s shooting troubles last year, Duane Wilson seems like the type of freshman who should play a big role next year. But that would go strongly against Buzz Williams track record. (Of course, Buzz Williams has never had a freshmen recruiting class as good as this one. Wilson, JaJuan Johnson, and Deonte Burton are all Top 100 players.)

But while this table is a nice first look at the question of whether coaches are willing to play freshmen, it can be a bit misleading. Sure, John Calipari has given a lot of minutes to freshmen. But he also hasn’t had much choice. With rosters full of elite first-year players and very few returning upperclassmen (at least at Kentucky), Calipari has almost had to play freshmen by default. Next week I will try to take a deeper look at this question and see how much of the commitment to freshmen is based on circumstance and how much is based on the coach truly favoring or disfavoring freshmen.