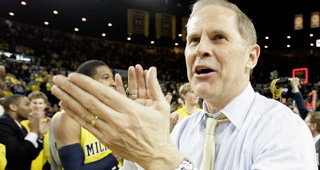 If you are looking for a coach whose team typically does get better later in the year, look no further than Michigan head coach John Beilein. In 8 of the last 10 seasons and for six straight years, Beilein’s teams have seen their Pyth. Winning Percentage improve after the opening two months.

Michigan has been extremely underwhelming in its marquee games this year. But in the past John Beilein has been able to solve his team’s weaknesses, and based on his track record, it is fair to expect significant improvement.

In general, here are the Top 10 coaches at getting their teams to play better over the course of the season. (Note I am only counting seasons when coaching at a major program over the last 10 years, and including coaches with at least 4 years of data.)

-Xavier’s Chris Mack is a perfect 4-for-4 at getting his team to play better later in the season.

-Michigan St.’s Tom Izzo would crack this list if not for a dreadful 2011 season. But in seven of the last 10 years, Michigan St. has improved during the year.

-The talk this season has been about Wisconsin’s increased tempo, but that appears to have been a two game mirage. While the Badgers did play fast against Green Bay and North Dakota, they have reverted to their historical norm. The Badgers currently rank 349th in the nation in average possession length on offense. And this is not just because of the Virginia game. The Badgers had fallen to 331st in the nation in average possession length before that game.

-After making 42 percent of his three point attempts last year, Georgetown’s Markel Starks has made just 25 percent of his long range shots (11 of 44), and just 39 percent of his two point baskets this year. That has put huge pressure on Georgetown’s only other scoring guard, D’Vauntes Smith-Rivera. When Smith-Rivera has been off, Georgetown has lost (Oregon and Northeastern) or narrowly won (Saturday against Colgate). Everyone keeps talking about how Joshua Smith needs to be more consistent, but Georgetown actually needs more consistent play from its backcourt.

-If Kansas is willing to play Colorado (who left for the Pac-12), they need to start playing Missouri again too. Sure there were a lot of hard feelings about Missouri’s departure from the Big 12, but if Kansas fans think their school would not have done the same thing, they are crazy. In the long-run, there is no reason for conference realignment to destroy regional rivalries. If we can still get our Seton Hall vs Rutgers matchups, we should still get Kansas vs Missouri.

-Bill Carmody’s Northwestern teams were notoriously bad on defense, so Northwestern fans had to be pleased to see their team hold Western Michigan to 24 percent shooting on Saturday. New head coach Chris Collins needs to upgrade the talent at Northwestern to win in the Big Ten, but if he can get the team to play defense, they can be more competitive in year one.

A few weeks ago I talked about why Washington, Iowa St., Duke, Oklahoma, and Florida St. were performing better or worse than expected this year. Today I want to look at two more teams.

What has happened: Santa Barbara is 3-3 which might not grab your attention, but when you look inside the numbers, Santa Barbara’s start has been quite dominant. First Santa Barbara won at UNLV by 21. Given UNLV’s struggles this season, that may not hold up as a quality win at the end of the year, but the margin on the road was impressive.

Then Alan Williams missed Santa Barbara’s next two games against Utah St. and Colorado. Williams was one of the best high volume shooters in the nation last year, and so far in 2013-14 he leads the nation in percentage of shots when on the floor. But despite missing the team’s most critical offensive piece, Santa Barbara hung tough in both games and narrowly lost to two potential NCAA tournament teams.

Williams returned for the teams win against South Dakota St. and loss at UCLA. And then the Gauchos had their most impressive performance of the year, a home win against a California team that will likely make the NCAA tournament out of the Pac-12.

3-3 might not sound that great, but the teams underlying stats have been extremely impressive. JUCO transfer Zalmico Harmon was not a Top 100 JUCO player and was not a guarantee to be an impact player. But Harmon has been a gifted passer as the part-time PG, and his ability to find players in scoring position has led to a huge jump in the team’s offense. Guard Michael Bryson has seen his ORtg jump from 92 to 108 and forward Taran Brown has seen his ORtg jump from 92 to 138. Last year Santa Barbara’s offense consisted of Williams and no one else. Now with efficient players surrounding Williams, Santa Barbara looks like a team that could make some noise in March.

Is the change permanent? Small sample sizes dictate that this could be a fluke. But the reason this feels more real is because of the difficulty of Santa Barbara’s schedule. If players like Bryson and Brown can elevate their game against power conference competition, they should be much improved in Big West play.

What has changed: The Cavaliers have lost their two biggest games of the season at home to VCU and Wisconsin and then went on the road and lost to Green Bay.

If you had told me Virginia lost these games before the season started, I would have assumed it was because of the team’s PG play. But as CBS Sports’ Jeff Borzello recently noted, freshman PG London Perrantes has not been the problem for the Cavs. Perrantes handled the ball better against VCU’s pressure than expected, and he was not the weak link against Wisconsin either.

The real problem is simple. Virginia was supposed to have two star players entering this year, Joe Harris and Akil Mitchell. And you simply are not going to beat quality teams if your star players do not play well. Against Wisconsin, Harris had his worst game in the last two years. But Mitchell’s performance this year has been even more distressing. A year ago, Mitchell was a high volume shooter and very efficient. But this year Mitchell’s shot volume has fallen from 25% to 15%, and his efficiency has dropped from 111 to 96.

Oh, and while Virginia’s defense had been dominant at home, the road trip to Green Bay resulted in Virginia’s worst defensive performance since a game against North Carolina in the middle of last season.

Is the change permanent? Harris and Mitchell will play better, and Virginia will still frustrate some quality teams in the ACC. But this team has been at its worst against quality opponents this season.

Harvard missed four of its last six free throws, committed a turnover in the final minute, and nearly blew a late six-point lead against Boston University. But in OT Wesley Saunders took over and ensured that Harvard would not suffer its second defeat of the year.

Without question Saunders is the ultimate under-sized wing player. His passing is great, he crashes the offensive boards with reckless abandon, and he can create his own shot.

Harvard now has a two week break for Finals. The Harvard Watch feature will take a break with the team.