The Importance Of Jump-Shooting Big Men 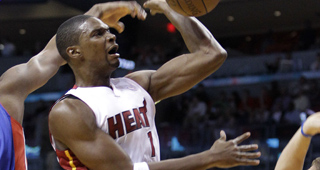 While both the Heat and Thunder have a first-team All-NBA forward and a second-team All-NBA guard, Miami has two big men who can shoot from the perimeter while Oklahoma City doesn’t have any. That’s the main reason why the Heat are one win away from the NBA Finals while the Thunder are going home.

A big man who can shoot from the perimeter is the best complement to a perimeter scorer, especially one who likes to attack the basket.

In their 22-point Game 1 win, the Chicago Bulls liberally helped off of Joel Anthony and Jamaal Magloire, the Heat’s offensively challenged center duo. Joakim Noah, Taj Gibson and Omer Asik attacked LeBron James and Dwyane Wade in the paint, knowing their men couldn’t harm Chicago. As a result, Miami’s stars combined to shoot 12-for-32 from the floor and their offense sputtered.

In Game 2, the Heat inserted Udonis Haslem into their big-man rotation, changing the dynamic of the series. While Anthony and Magloire took only four shots in Game 1, Haslem took ten in Game 2 -- including five 15-20 foot jumpers.

Since both Haslem (who took 78% of his shots this season from the perimeter) and Chris Bosh (who took 71% of his from outside) are dangerous outside shooters, their men had to defend them when they left the paint. Suddenly, the middle of the floor was wide open for LeBron and Wade.

Miami is virtually unstoppable with that line-up on the floor. The quartet played the entire fourth quarter of Game 3, with a combined plus/minus rating of +8. In Game 4, they played ten minutes in the fourth quarter and all of OT, outscoring the Bulls by +16.

And while offensive spacing saved the Heat, a lack of it killed the Thunder.

Oklahoma City shortened their big-man rotation in the Western Conference Finals, playing Kendrick Perkins, Serge Ibaka and Nick Collison. None are reliable perimeter shooters, and they went a combined 0-for-3 outside of the paint in Game 3.

Despite his success going small at the end of Game 2, Scott Brooks stubbornly played two big men for the entire first half of Game 3. With the Mavs freely helping off both of the Thunder’s interior players as well as Thabo Sefolosha (a 27.5% three-point shooter), there was no room on the floor for Oklahoma City’s stars to operate, and the Thunder scored 29 points in 24 minutes.

Oklahoma City’s inability to score with a traditional line-up became the theme of the Western Conference Finals: their fourth-quarter collapse in Game 4 coincided exactly with James Harden fouling out and the re-insertion of Sefolosha into the game. They took control of Game 5 when they went small with Durant playing center and Harden, Westbrook and Maynor on the perimeter.

But despite leading for most of the fourth quarter, the downside of going small ended up costing them the game in the last two minutes. They couldn’t grab two key defensive rebounds: one led to a Dirk three with 1:14 left that gave Dallas their first lead of the quarter, the second gave Dirk two free throws to ice the game with :16 left.

** The playoffs test coaches as much as players: the Mavericks last possession was the perfect time for Brooks to go offense/defense and put more rebounding on the floor with Sefolosha and Ibaka instead of Maynor and Harden. **

At the level of the Conference Finals, with only four teams still playing, any weakness in a rotation player will be exposed. That’s why teams often struggle to make it back after losing; their future playoff rivals now have a ready-made blueprint to defeat them.

The Thunder will have to improve their front-court spacing in the off-season, either by improving internally (Durant getting stronger so he can rebound more effectively at the 4, Ibaka continuing to improve his jumper) or targeting a jump-shooting big man in the draft (Purdue’s JaJuan Johnson, Kansas’ Markieff Morris or Richmond’s Justin Harper).

Conversely, the constant adjustments the Conference Finals requires can unearth a hidden gem, like the Heat’s front-court duo of Bosh and Haslem. With Haslem out for most of the regular season with a foot injury, Miami struggled to close out games. But now that they can use one of the most indefensible line-ups in the NBA, their opponent will have to score a lot of fourth-quarter points to win.

A championship team is like a jigsaw puzzle: all the pieces have to fit together. And in the fourth quarter of a tight playoff game, the games of all five players on the floor have to complement each other.