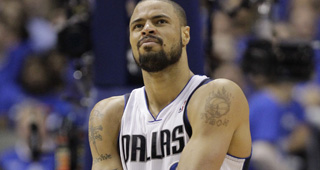 Despite having only two rotation players -- JJ Barea and Tyson Chandler -- under the age of 29, the championship window of the Dallas Mavericks isn’t closing anytime soon.

The Mavs have been staggeringly consistent, winning at least 50 games for 11 straight seasons, a number matched by only Magic Johnson’s Lakers and Tim Duncan’s Spurs. In that span they’ve had three different head coaches and thirteen players who’ve made All-Star teams in their careers, but they’ve kept the three most important figures in place: their franchise player (Dirk), GM (Donnie Nelson) and owner (Mark Cuban).

On the court, everything revolves around Nowitzki, a seven-foot jump-shooting machine and one of the top 25 players of all-time. While most 32 year old players with over 1,100 regular season and playoff games would be declining, he’s actually improving as a player: he had the highest true shooting percentage (61.2%) of his career this season.

That’s because his game revolves mainly around his size and shooting ability, two things that don’t decline with age. Karl Malone, another Hall of Fame bound jump-shooting power forward, won MVP’s at 33 and 35; his PER didn’t dip below 24.0 (the mark of an All-NBA player) until the age of 37.

If Nowitzki follows Malone’s career path, he’d be an elite offensive player and a primary option on a championship caliber team until 2016. Health is always a concern for older players, but since Nowitzki hardly ever leaves the ground, he’s not often in a position to get injured.

Of course he isn’t immune to the effects of aging, and his declining athleticism can be seen in his rebound rate -- slipping from 14.8 in his MVP year (2006-2007) to 12.0 this season. That’s why Tyson Chandler, an athletic 7’1" 235 center, is the only other indispensable player on the Dallas roster.

Chandler finished third behind Dwight Howard and Kevin Garnett in the voting for Defensive Player of the Year, and his ability to anchor the defense and protect the rim is the biggest reason why Dallas has returned to the NBA Finals after a five-year absence. An excellent shot-blocker (1.4 a game) and rebounder (a 19.7 rebound rate, 9th in the NBA), he has the foot-speed to guard perimeter-oriented power forwards and the strength to guard low-post centers, allowing Dallas to hide Dirk on the opponent’s worse front-court player.

His injury history is a huge concern, especially considering the massive contract he’ll get as a free agent this off-season. But the upside is that he has less wear and tear on his body than many other 10-year NBA veterans. Marcus Camby, who has a similar build, became more durable as he got older and maintained his rebound and block rates well into his mid-30’s.

As long as Dallas has a frontline of Nowitzki and Chandler, they’ll be a near-elite team. Five years from now, in 2016, Dirk will be 37 and Chandler 33. That’s how long the Mavs window is open.

Most of the rest of the roster will need to be replaced, but Dallas’ front-office duo of Cuban and Nelson has successfully done it twice before.

When Nowitzki first made the Conference Finals in 2003, Steve Nash, Michael Finley, Nick Van Exel and Raef LaFrentz surrounded him. He was the only player left when the Mavs returned to the WCF three years later, this time flanked by Josh Howard, Jason Terry, Devin Harris, Jerry Stackhouse and Erick Dampier. While Terry is still in Dallas, the roster around Dirk has been re-shuffled again in the last five years, with Jason Kidd, Shawn Marion and Chandler rounding out the starting line-up.

Right now, they have two promising late first-round picks -- Dominique Jones and Rodrigue Beaubois -- who could help them get younger on the perimeter. While Beaubois struggled with his confidence after missing the first 56 games of the season with a foot injury, as a 21-year old rookie he averaged 20 points on 51% shooting per-36 minutes. Jones couldn’t crack the Mavs veteran rotation before he broke his foot, but in the playing time he got, he displayed the ability to break down the defense and create shots (averaging 11 points and 5 assists per-36 minutes) that made him a star at South Florida.

Dallas paid Memphis $3 million for Jones’ draft rights, a smart way to leverage Cuban’s deep pockets. At $86 million, they have the third highest payroll in the league, largely due to another creative twist -- adding non-guaranteed years to the end of their player’s contracts so they can take advantage of teams trying to cut salary. That’s how they turned Dampier into Chandler and Stackhouse into Marion.

And that’s why the biggest impediment to the Mavs success going forward might not be on the floor but in the boardroom. An NHL-style hard cap, which many owners favor, would eliminate much of Dallas’ financial advantage, especially since so many of their contracts are back-loaded.

However, it seems unlikely that such drastic steps will be taken, especially since a hard cap would disband teams like the Heat and the Lakers, the primary drivers for the league’s explosion in popularity this season.

When Dallas first exploded onto the national stage in 2000 with a shocking first-round upset of the Utah Jazz, they were led by a “Big Three” of Dirk, Nash and Finley. Eleven years later, the “Big Three” of Dirk, Nelson and Cuban could keep the Mavs relevant well past the expectations of many observers.