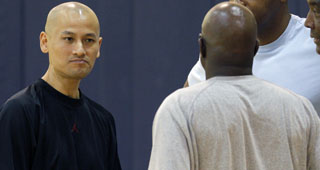 "One of the worst things you can do in this league is be a middle-of-the-road team - in the playoffs one year, out the next," [new Charlotte Bobcats GM] Rich Cho said recently. "One of the tough things about a middle-of-the-road team is you never get really good draft picks. That makes it hard to have sustained success. Sometimes you have to take a step back to take two steps forward."

Cho’s new team is a great example of the perils of the “mediocrity treadmill.” Over the last five years, the Bobcats’ win totals have been remarkably consistent: 33, 32, 35, 44 and 34 games.

Their mediocrity stems from poor drafting at the top of the lottery. They had a top-five pick in three straight drafts from 2004-2006; they used them on Emeka Okafor, Raymond Felton and Adam Morrison. Instead of being the core of a playoff contender, Charlotte now has nothing to show for any of them.

And without an All-NBA player to build around, the Bobcats have had a firm 45-win ceiling.
While basketball is a team sport, one individual can have a much bigger impact on a game than in football or baseball. The result is a pyramidal distribution of talent, and for a small-market team like Charlotte, the only way to get that type of elite talent is the draft.

But over the last five years, the Bobcats’ marginal record season records have kept them out of the top of the lottery. They selected 8th in 2007, 9th in 2008, 12th in 2009 and have the No. 9 pick this year. And as ESPN Insider showed in a comprehensive regressive analysis of the draft, the chances of drafting an All-Star fall almost exponentially after the top-five picks.

Paradoxically, drafting a solid role player like DJ Augustin or Gerald Henderson at the end of the lottery can actually hurt an organization: continuing the cycle of mediocrity while inferior teams that took franchise talent earlier in those drafts (Chicago, Oklahoma City) rocket past them. SI’s Zach Lowe recently argued that finding a player the caliber of JJ Redick would be a good outcome for Charlotte, but what would acquiring Redick himself do for the Bobcats? He’d be just good enough to keep them drafting at No. 9 for the next five years.

Of the franchises drafting from No. 9 to No. 16 this year -- teams not bad enough to get a high pick and not good enough to be serious playoff threats -- Charlotte is one of three without an All-NBA caliber player or a young player with All-NBA upside. The Bobcats, Pacers and Rockets are stuck firmly on the mediocrity treadmill. All three should throw caution to the wind and swing for a home-run in the draft, and all three would be better off striking out than grabbing another solid role player.

Indiana’s pattern of win totals -- 36, 32 and 37 -- and draft selections -- No. 11, 13 and 10 -- over the last three years are a near mirror image of Charlotte’s. And while they were able to unearth an All-Star caliber player (Danny Granger) in 2006 and put a bunch of solid young players around him, they don’t have anyone with the talent to push them past New York and Philadelphia, much less Miami and Chicago.

Last season, they took a gamble on Paul George, a super-athletic swingman out of Fresno State, and he has more upside than anyone else on their roster. With eight solid rotation players already on their team, they need to do something similar this year, instead of playing it safe with more guys like Brandon Rush and Tyler Hansbrough.

And after losing Yao Ming to what looks like a career-ending injury, the Houston Rockets are in a similar boat. They won 42 games two years ago and 43 last season, and their best two players are 28 (Kevin Martin) and 31 (Luis Scola) respectively. Their isn’t much room for significant internal improvement either; the only top-10 draft picks they have (Jordan Hill and Hasheem Thabeet) are too unskilled to ever be much more than solid big men.

Unlike in baseball and football, where the drafts are crap-shoots and teams have upwards of 40 players on their rosters, basketball is much more conducive to rapid turnarounds. Only five teams -- New Jersey, Golden State, Sacramento, the LA Clippers and Minnesota -- have missed the playoffs in the last four seasons.

Indiana and Houston have actually done a pretty good job of roster management over the last few seasons, drafting well and avoiding bad contracts, but they’ve been building on broken foundations. What they need to recognize is that building a 45-win team isn’t an accomplishment; it’s actually rather easy.

And if neither are willing to follow the radical rebuilding Charlotte began at last year’s trade deadline -- giving away Gerald Wallace and Nazr Mohammed for next to nothing -- then they need to look for franchise players, not role players, in the draft. From their draft position, that means taking chances.

They should sift through the two main sources of undervalued players -- college players who didn’t live up to their high-school pedigree and international players who will have problems transitioning to the NBA.

Three players stand out from the first bunch -- Josh Selby, Iman Shumpert and Jeremy Tyler. None is a sure-fire contributor: Selby barely made an impact in his one year at Kansas, while Shumpert’s teams at Georgia Tech consistently underperformed and Tyler has been on a two-year odyssey since deciding to play professionally in Europe after his junior year of high school. But all three are phenomenal athletes with top-10 upsides.

And while international players are the strength of this draft, recent mock drafts have a few slipping into the end of the lottery. Buyout problems have plagued Jonas Valanciunas and Nikola Mirotic, two athletic 6’10+ players with impressive skill-sets, while Bismack Biyombo, a super-athletic 6’9 shot-blocker out of the Congo, remains a mystery to nearly everyone.

There’s no guarantee any of the six will significantly alter a team’s fortunes. The only guarantee is that if Houston, Charlotte and Indiana try to play it safe, we’ll be able to re-run this column in 2013.