The Impact Of Ownership 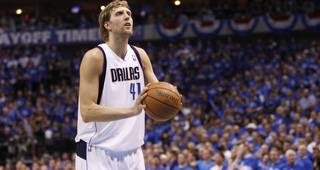 A lot of things outside a player’s control -- his teammates, his opponents, his coaches -- can affect his career. There’s no better example than Steve Nash and Dirk Nowitzki, best friends who started in Dallas and became MVP’s after splitting up. Since signing in Phoenix, Nash has been hamstrung by the ownership of Robert Sarver, one of the most tight-fisted owners in the NBA. In contrast, Dirk has played for the notoriously free-spending Mark Cuban, who has racked up the league’s second-largest luxury tax bill since 2005.

Both are dominant offensive players, capable of scoring at will on almost any individual defender as well as creating open looks for their teammates. And while they shared a unique chemistry in Dallas, both were more effective after Nash’s departure, when they were surrounded by superior athletes who could make up for their weak defense.

Dirk is more valuable, simply because he is nine inches taller. But for all his talents, the Mavericks run to the 2011 title forever changed his legacy. Nash, on the other hand, seems likely to end his career on a Suns team stuck on the mediocrity treadmill – not good enough to be a playoff threat, not bad enough to rebuild through the draft.

Cuban’s largesse is behind almost every player on the Mavs roster. Instead of letting Erick Dampier’s contract expire, Cuban took a $12 million gamble on the oft-injured Tyson Chandler, whose ability to anchor their defense was the key difference to Dallas’ reversal in playoff fortunes. Acquiring Chandler made Brendan Haywood a $55 million backup, but Cuban held on to him as well, knowing they would need his size to combat the Lakers massive front-line in a playoff series.

Shawn Marion, whose ability to defend multiple positions and score without having the ball in his hands made him a great piece next to both Dirk and Nash, was acquired in a similar fashion: Cuban used the last un-guaranteed year of Jerry Stackhouse’s contract to acquire Marion and give him a 4-year $42 million deal.

Getting Jason Kidd, a 6’4 point guard whose ability to cross-switch on defense gave Jason Terry and JJ Barea the freedom to score, required even more of Cuban’s money. After Devean George invoked an obscure clause in his contract to block Dallas’ initial deal with the Nets, Cuban had to take on an additional $4.2 million in salary by signing Keith Van Horn despite his retirement the year before.

Most importantly, Cuban never stopped believing in Dirk, going deep into the luxury tax every season despite winning only one playoff series in the four years after the Mavericks’ 2006 Finals collapse.

In his first year in Phoenix, Sarver passed on a golden opportunity to extend Joe Johnson. Johnson, a 6’8 240 guard who could spell Nash at the point, exploded the next season, getting a maximum salary offer from the Atlanta Hawks that Sarver refused to match. Say what you will about Cuban’s off-court behavior, but he would never let a 25-year-old future All-Star leave over money.

Cuban buys draft picks; Sarver sells them. Since 2004, Phoenix has sold the rights to Luol Deng, Rudy Fernandez, Sergio Rodriguez, Nate Robinson, Serge Ibaka, Wilson Chandler and Craig Brackins. It’s hard to imagine how much better the Suns would be now if they had kept their young talent.

In a world where Cuban and Sarver switched teams, the Suns would still be one of the NBA’s elite teams. They’d have Amare Stoudemire and Joe Johnson to ease Nash’s burden offensively and more than enough trade pieces to acquire the type of defensive-minded big man that pushed the Mavs over the top. Dirk, meanwhile, would be stuck on an aging roster, fighting just to make the playoffs every season.

If Nash had lead the Suns to a title, many would have placed him over Kidd, John Stockton and Gary Payton historically. Dirk, without another legitimate shot at a championship, would have been seen as one of the greatest choke-artists of all-time. The impact ownership can have on a player’s career is another reason why team achievements should be taken with a grain of salt when comparing individual players, and it’s a cautionary note to the three elite free agents of 2012 – Dwight Howard, Deron Williams and Chris Paul.

The Clippers, with a young core of Blake Griffin, Eric Gordon and DeAndre Jordan, make a lot of sense from a basketball perspective, but can any star trust Donald Sterling with the prime of their career? And while Williams and Howard don’t have a lot of talent around them currently, the Nets’ Mikhail Prokhorov and the Magic’s Rich DeVoss have both demonstrated they are willing to spend to win. In contrast, if Paul stays in New Orleans without a big-pocket owner willing to buy the team off the NBA, it will be almost impossible for him to compete for a title.

Even if the lockout results in a hard salary cap, instead of the current soft-cap system that Cuban manipulated so effectively, there will likely still be huge differences in what teams are willing to spend. That’s what happened in the NFL and NHL after both leagues instituted hard caps over the last decade.

Whatever happens with the lockout, the free agency of three of the NBA’s best young players – Dwight Howard, Chris Paul and Deron Williams – will be the big story of summer 2012. There will be a lot of variables affecting their decision, none more important the owners of their various suitors.