How Kentucky's National Championship Is Good For College Sports 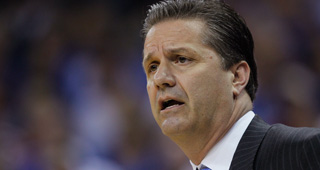 The fact that a team with Anthony Davis, Terrence Jones and Michael Kidd-Gilchrist won a national title isn’t all that remarkable. What’s remarkable is that three of the most highly recruited prospects from all over the country (Chicago, Portland and New Jersey) decided to play in Lexington in the first place.

The University of Kentucky didn’t have to become a basketball powerhouse again. The school isn’t close to any of the traditional areas that produce elite basketball talent; Darius Miller (2008) could become the state’s first Mr. Basketball to play in the NBA since 1990 (Dwyane Morton).

Kentucky gets the best players nearly every year because they have John Calipari, one of the best, and most honest, coaches in the business, and they have Calipari because they can afford to pay him $4.5 million annually, second only to Louisville’s Rick Pitino.

It’s no coincidence the state of Kentucky has the sport’s two highest paid coaches. College basketball is an integral part of the state’s culture; Kentuckians care more about it than in most other places, and because they care so much, they’ve turned their schools into basketball powerhouses. That’s what makes their latest national championship so special: it shows the power fans have in collegiate sports, especially in comparison to how they are exploited on the professional level.

In college sports, schools with more fans have bigger budgets, giving them more money to spend to build and maintain better programs. Like most entertainment-related businesses, the NCAA is built around the notion that customers who spend more should be rewarded with a higher quality product.

NBA fans generally find a system where the best talent plays on the biggest stage heretical; they don’t want kids in America’s most populated cities having a better chance of becoming basketball fans by rooting for a hometown star. It apparently makes more sense to randomly distribute the sport’s most talented players across the country while leaving their development completely to chance.

But while owners love to emphasize the importance of “increasing competitive balance”, parity is mainly an excuse to justify a series of outrageous money grabs.

Unlike in Europe, where poorly run teams have to deal with the possibility of relegation, the NBA, NFL, NHL and MLB are tightly controlled monopolies that have completely cornered the market on their respective sports. American owners have eliminated even the possibility of failure: if there were only 30 houses in the entire country, there would have never been a housing bubble. Even if you owned the most run down house imaginable, since no other houses could be built, it would still be an extremely lucrative investment guaranteed to grow in value over time.

To retain their market share, college teams feel significant pressure to excel on a yearly basis in a way that professional ones don’t. NBA teams can fall victim to the same sort of “resource curse” that afflicts third world countries with oil reserves. The ruling elite in Saudi Arabia don’t need to develop a middle-class economy to sustain a tax base; they can just extract money directly out of the ground, i.e. the Golden State Warriors over the last two decades.

Yet even staying away in droves gives fans only so much power. Unlike college teams, who have a legitimate connection to the local community, professional teams have no problem leaving town. Kentucky can’t extort the city of Lexington into diverting tax resources from schools and hospitals in order to build a new stadium with more luxury boxes by threatening to move to Atlanta.

By playing cities against each other, owners have pawned off most of the actual responsibilities of ownership. Under the basic theory of capitalism, they provide the infrastructure (stadiums) necessary for the workers (players) to create the product (games), with the revenue generated compensating the workers for their labor and the owners for their investment.

Yet if cities are the ones paying for the infrastructure, why even have private owners? The vast majority of professional sports teams would do better if they were run like the Green Bay Packers, a non-profit trust owned and operated by the people of Wisconsin. Owners are essentially parasitic “rent-seekers” who have managed to situate themselves between the fans who ultimately supply the revenue and the players who receive it, demanding a cut and threatening to shut everything down if their feelings are hurt or their profit margins aren’t high enough.

Frank McCourt just cleared over $1 billion in profit by selling the Los Angeles Dodgers after a disastrous eight-year stint as their owner, where he used the club as his own personal piggy bank while setting it back years in terms of what it spent on player development. The Dodgers should be one of the premier organizations in MLB, but there’s nothing Los Angeles fans can do to affect that. Either the new ownership group will hire solid front-office personnel and give them a chance to succeed or they won’t.

In contrast, Kentucky fans can run a coach and an athletic director out of town after one poor season if they want to. They are the school’s most valuable “natural” resource, and as long as they stay devoted to the sport, their school will have one of its premier teams. Calipari could probably win anywhere in the country, but the Wildcats won national titles long before he got there and they will win them long after he is gone.

That’s because college sports programs belong to their fans while professional sports organizations belong to their owners. There a lot of things seriously wrong with the NCAA and its underlying business model, but the situation in the NBA is far, far worse.