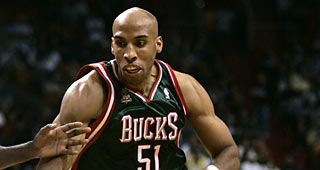 The Chicago Bulls announced today that the team has re-signed forward/center Michael Ruffin to a contract.