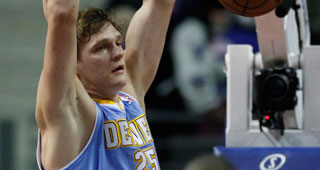 Free agent center Timofey Mozgov is in negotiations with the Denver Nuggets on a multi-year contract to re-sign with the franchise, a league source told RealGM.

Ever since making changes within the organization, the Nuggets have become more interested in re-signing Mozgov, trading away Kosta Koufos on draft night. Mozgov has already received a qualifying offer from the Nuggets, but the parameters of a new deal have been discussed as a possible three-year contract with an option on the third season, a source told RealGM.

Mozgov had once been thought of as one of the most skilled center prospects in the NBA while with the New York Knicks, but he received little playing time under George Karl. Even so, Mozgov told RealGM in April, “I feel confident I can play. I know I can play and I know Coach knows I can play, so I feel confident. I just need some [playing] time.”

Now, the Nuggets are far more committed to give Mozgov a fair trial in the rotation, and they remain enamored with his footwork and agile post moves around the basket. Should Mozgov re-sign, Denver would have a young, developing center duo in the Russian big man and JaVale McGee.

Mozgov, 26, averaged just 2.6 points last season, but he has shown production with minutes, including a 10-point, 10-rebound game in the regular-season finale. Mozgov was part of the Carmelo Anthony trade between the Nuggets and Knicks in 2011.