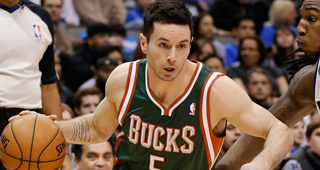 The Los Angeles Clippers, Milwaukee Bucks and Phoenix Suns have agreed upon a three-team trade.

The Clippers will acquire J.J. Redick and Jared Dudley, while sending Eric Bledsoe and Caron Butler to the Suns. The Bucks will acquire two second round picks.

Redick will receive a four-year, $27 million deal as part of the sign-and-trade.

The Clippers have long considered Bledsoe as their best movable asset to improve the structure of their roster. Bledsoe's minutes were always going to be limited playing behind Chris Paul and the Clippers would not be able to afford to keep him on a new deal in 14-15.

The three-team deal came together in less than 24 hours as the Clippers did not put Bledsoe on the market until Paul agreed to his extension.

A source tells ESPN's Ramona Shelburne that Doc Rivers was "amazing" during his dinner on Monday with Redick. The meeting convinced Redick that he wanted to join the Clippers.