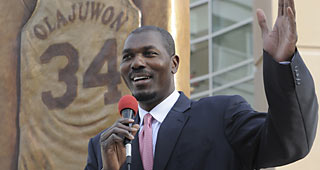 Hakeem Olajuwon will join the Houston Rockets as an official employee.

Olajuwon has expensively tutored many of the NBA's players during the offseason in Houston and will continue that work with the Rockets.

“We are going to bring him in as full-time as is possible,” Rockets general manager Daryl Morey said Sunday. “It’s not done, but we have mutual interest to get it done, and we’ve had some early discussions.

“We want him to work with Dwight (Howard) and Omer (Asik), and he wants to do that.”