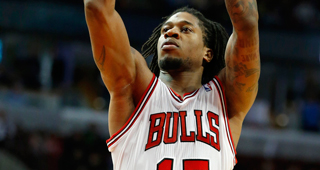 Free agent forward Cartier Martin has agreed to sign a 10-day contract with the Atlanta Hawks on Saturday, a league source told RealGM.

Over two 10-day contracts with the Chicago Bulls, Martin scored 15 points in 48 minutes of action, providing a spark and receiving support from Tom Thibodeau to be signed for the entire season. Still, he wasn’t retained on Thursday and had been sorting his options.

For Martin, this means a return to the Hawks franchise with which he started the season, averaging 6.6 points and two rebounds. Martin gave Mike Budenholzer a rugged defender and a wise reserve but was released before his deal became fully guaranteed.

The Hawks created room on their roster by deciding not to keep James Nunnally after his second 10-day deal expired on Friday. Nunnally has already received interest from NBA teams, a league source told RealGM, but plans to return to the D-League if nothing forms.

Martin, 29, has averaged 5.4 points and two rebounds in his six-year NBA career, playing for five different teams. A rookie out of UC Santa Barbara, Nunnally averaged 4.5 points in three appearances for the Hawks in January.