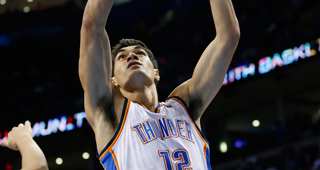 Steven Adams has become one of the NBA's most infamous agitators in his rookie season.

Adams was the 12th overall selection in the 2013 NBA Draft out of Pittsburgh by the Oklahoma City Thunder.

Adams grew up in New Zealand and was an unknown basketball talent until Ken McFadden discovered him and told Pitt head coach Jamie Dixon about him.

Dixon jokes that he recruited Adams for five years and had him for five months, but it took others, like McFadden, to convince Adams that in an outdoors-oriented country, sports could be something more than a weekend activity.

“A kid in New Zealand doesn’t see athletics as a way to an education and financial riches,” Dixon said. “The All Blacks can make some money, but not the money we think of here when you reach the pinnacle.”

Adams was punched in the jaw by Zach Randolph in Game 6 of the first round, leading to a suspension for the Memphis Grizzlies' power forward.

“Red Auerbach always told me you need to get agitators,” Doc Rivers said. “He’s one of those for sure.”

Adams is called Tarzan by some of his teammates.

“When you play hard, a lot of guys don’t want you to play hard,” Scott Brooks said. “This is a competition, so you have to be ready to play against Steven Adams because he’s going to give you everything he has.”