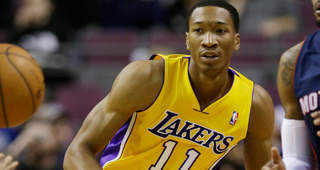 Free agent forward Wesley Johnson will commit to a contract with the Los Angeles Clippers, expecting to finalize his agreement on Wednesday, league sources told RealGM.

Johnson is expected to sign a veteran’s minimum deal worth $1.1 million, sources said. In Johnson, Doc Rivers has landed the commitment of a clear improvement on the wing, an athletic upgrade capable of spacing the floor and finishing at the rim.

Johnson and Rivers met on the first night of free agency, and remained in dialogue while the 6-foot-7 forward received interest from the Atlanta Hawks and New Orleans Pelicans.

Johnson spent the past two seasons with the Lakers, with career highs of 9.9 points, 4.2 rebounds and 1.6 assists in 29.5 minutes per game in 2014-15. Over five NBA seasons, Johnson has played for the Minnesota Timberwolves, Phoenix Suns and Lakers.

Johnson was the fourth overall pick in the NBA draft in 2010 out of Syracuse.