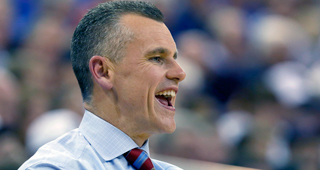 Kevin Durant has begun to open up about the differences between Billy Donovan and Scott Brooks.

“He's running more sets, I think,” Durant said of Donovan's offense compared to Brooks's. “He's put in different packages for guys at different positions. Scotty did a great job of moving the floor, and allowing his iso players to make plays, and I think Billy is doing that, too, but it's a little bit different. We're moving around a little bit more, moving from side-to-side a little bit more.

“In Scotty's defense, as players we had to do a better job of producing ourselves — moving the ball, moving our bodies. We just get more conscious of it every day, and it's preached to us every day.”