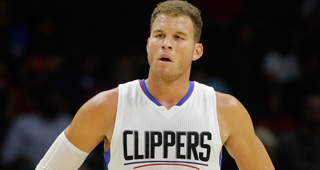 Doc Rivers was asked about trade rumors involving Blake Griffin and his future with the Los Angeles Clippers.

"One, I'm glad you asked the question," said Rivers. "It's funny, you don't want to go out and send out a press release every time there's a rumor about Blake. We're hoping Blake ends his career playing for the Clippers. Period. So when teams call, we say we have no interest.

"First of all, no team is calling right now because teams know we don't have any interest. It just tells you the different times, you know. Things have changed. Everyone believes that they're media now. I feel for guys like you. There's so many good credible guys and there's some of the guys that are bloggers that have nothing to do with the sport. I had my young son trace where this started, the Blake rumor to Boston.

"Danny and I have talked twice this summer. One was about the British Open and one was about another golf tournament. That's about it. But my son traced it to a Boston radio talk show and the guy didn't say that we had been talking, he said Blake was one of the guys that Boston should go after. That started the next step to the next step. That stuff is tough."

Griffin and Chris Paul will be free agents in 2017 and Rivers was asked about his confidence in keeping the Clippers' core together.

"Well, I'm confident, probably the same way they're going to be able to keep their guys," said Rivers. "I do think we have an attractive place. We have a new owner. It would be interesting if Steve Ballmer wasn't the owner, I don't know how confident I would be. With Steve, I'm extremely confident that we can keep both. You know, listen, winning is the key. The better we play on the floor, the better chance we have of not only keeping those guys but actually adding to our basketball team. That's always the key factor in this. Quality of life is important, being comfortable, players getting along with the staff and each other. All that goes into it. But I think we're in a good place there. I know both of them have said they want to play here. They want to play for us forever.

"Your job never stops. You never relax. You never take a player for granted."