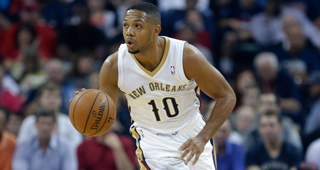 Mike D'Antoni will consider using Eric Gordon as a starter for the Houston Rockets once the regular season begins.

Gordon has typically started throughout his career and D'Antoni wants him to adjust to that role at least initially.

The Rockets will start Patrick Beverley at one of the guard spots alongside James Harden who is now being used as a point guard.

Gordon signed a four-year, $53 million deal with the Rockets in the offseason.