Mike D'Antoni: Rockets Have Same Philosophy, From Owner To GM To Star 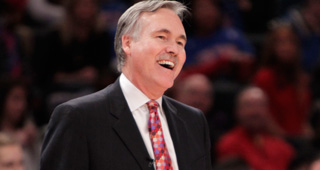 The Houston Rockets have played well to start the Mike D'Antoni era, rebounding from a disappointing 16-17 season. The Rockets are playing with pace and efficiency on offense with their system built around James Harden.

“The good thing about when I took the job was that James wanted to play in the way that I wanted to coach, and that’s taking a lot of threes, getting to the rim, in the paint and foul shots,” said D’Antoni. “And so (it’s) the same philosophy, from the owner to the general manager to the star player.

“It’s worked out better than I thought.…We were hoping that it would get this good, and I think we can get it even better.”

Harden's assists have jumped from 7.5 per game to 11.6 this season.

“(D’Antoni) just told me he was going to make me the point guard and just continue to make me a better player, and he’s doing that. He isn’t trying to control. He just tries to help. And if I see something, I’ll throw it at him. It’s a real friendship; it’s obviously coach and player. And it works.”

D'Antoni is at his creative best again with the harmony of ownership, the front office and players.

“With the help of Daryl and those guys, they push my limits too,” D’Antoni said. “(Sometimes) I’m backing off (philosophically), like ‘Oooh ….’ I get scared, too, getting out on the ledge. But it’s wide open. Do it. And if we come up with something that we think is effective and different, then they’re not afraid to do it. And that’s what I really like.”