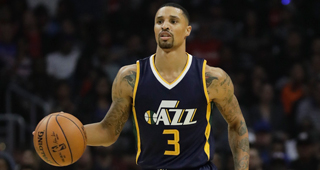 The Los Angeles Lakers and George Hill are meeting to discuss a one-year deal.

Hill has also been in talks with the Denver Nuggets and New York Knicks.

Hill turned down a renegotiate and extend offer from the Utah Jazz in February, who traded for Ricky Rubio on June 30th as insurance in case Hill leaves.

The Lakers are only interested in signing players on one-year deals in order to keep their cap space maximized for 2018.

For the Lakers, Hill could play beside Lonzo Ball as on off-ball point guard. Hill also played alongside Paul George for five seasons with the Indiana Pacers.