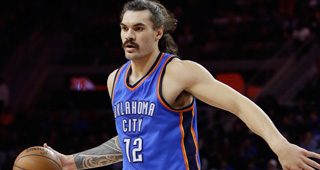 The Atlanta Hawks have internally discussed the possibility of trading for Steven Adams.

Adams is due to make $27 million next season before becoming a free agent in 2021. Adams signed an extension with the Oklahoma City Thunder in 2016.

The Thunder are expected to embark on a rebuild and Adams is at an age where he could conceivably be young enough to remain part of their long-term plans.

The Hawks have identified center as a position of need.