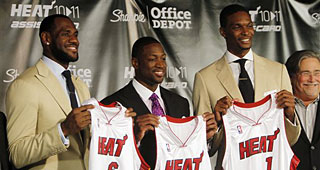 During the 2012 Eastern Conference Finals, the Miami Heat were down 3-2 against the Boston Celtics and LeBron James feared Pat Riley would break up the team if they were eliminated.

The Heat were in Year 2 of the experiment of James, Dwyane Wade and Chris Bosh.

"My mentality was if we lose, [Heat president] Pat Riley may break us all up. And I [didn't] want that," James said. "It might be the quickest breakup in basketball history."

The Heat never seriously considered such action and went on to win The Finals against the Oklahoma City Thunder. The Heat also signed Ray Allen that offseason.

James scored 30 points in the first half of Game 6.

"Not only might they break it all up, but my legacy is going to take a huge, huge hit if I don't go out here and perform at an all-time high," James said Thursday.