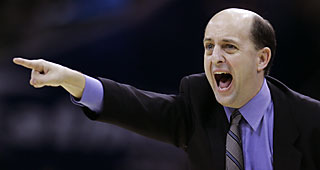 The Houston Rockets continue to search for a new head coach to replace Mike D'Antoni as head coach.

"I still think Jeff Van Gundy is probably the favorite but they're definitely doing their due diligence," said Tim MacMahon.

While Van Gundy appears to be an odd fit with the Rockets, MacMahon says he is the candidate that has been most strongly linked with the job throughout the season.

The Rockets have had an extensive search to date and have yet to schedule interviews yet with Van Gundy and Tyronn Lue.

The Rockets could be limited financially in hiring a candidate such as Lue.

"Another thing is, Ty Lue is interviewing there... I'll be honest with you, I don't think Tilman Fertitta is paying Ty Lue's market value. I don't think he's paying top dollar for a coach."

Part of the reason why Lue decided not to take the head coaching job with the Los Angeles Lakers last offseason was due to the years and money offered to him.