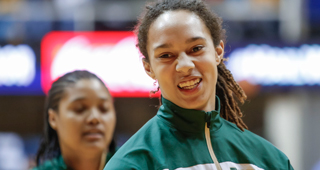 Brittney Griner was reportedly detained in Russia sometime last month. Reports are that Griner was arrested at the Moscow airport after a search of her luggage turned up cannabis vape cartridges.

Russian authorities have not specified that Griner was arrested, nor the date of the arrest, but did say it was a USA women's basketball player. Griner was in Russia to play for UMMC Ekaterinburg. During the WNBA offseason, several US-born players play overseas.

Griner's agent, Lindsay Kagawa Colas, did not dispute Griner had been detained in a statement.

“We are aware of the situation with Brittney Griner in Russia and are in close contact with her, her legal representation in Russia, her family, her teams, and the WNBA and NBA,” Kagawa Colas said Saturday. “As this is an ongoing legal matter, we are not able to comment further on the specifics of her case but can confirm that as we work to get her home, her mental and physical health remain our primary concern.”